Nong Khai (หนองคาย) is a city in Isaan. The city lies on the west bank of the Mekong River, only 20 km from Vientiane, the capital of Laos.

Known as the Naga City (Nagas being the giant serpent guardians said to inhabit the Mekong River - see below) and famed for its lovely position on the Mekong, Nong Khai is a bustling Thai town and the gateway to Laos and Vientiane. It has many beautiful features which attract a considerable number of Thai and foreign visitors every year, including Sala Keaw Khu the almost surreal sculpture park; the enormously revered Luang Por Phra Sai Buddha Image which has a remarkable history; the truly extraordinary Phu Phra Bat Historical Park (though in Udon Province it is easily reached from Nong Khai); and the Thai-Lao Indochina Market called Tha Sadet Market which occupies many streets in the centre of town. A large part of the centre of town, including the river bank, has been made pedestrian-only. The Thai-Lao Friendship Bridge, opened in Apr 1994, was the first bridge across the lower Mekong, and only the second on the full course of the Mekong.

Nong Khai is an exemplar of Isaan culture, which dominates northeast Thailand and which has an identity distinct from the culture of the centre, north, and south of Thailand. Famed for its warmth, kindness and friendliness, the culture has evolved from its Thai and Lao roots. Today, the distinctive Isaan culture is a source of pride to those born into it. Most locals speak both Thai and the local dialect called Isaan, which is closely related to both the Thai and Lao languages. Many locals also speak a bit of English, some Vietnamese, and some Chinese.

Nong Khai played a central role in the Yunnanese (Chinese) Hor Rebellions of the 1880s. Later it was under French rule until 1932, and some examples of French architecture remain. During the Vietnam War, it became home to many Lao, Vietnamese, and Chinese immigrants who have added their own culture and entrepreneurial skills, to the great benefit of the town.

Nong Khai is filled with literally hundreds of images of the Naga, the Mekong giant serpent. Two huge five-headed Nagas adorn the main gate to the city. One lurks in the city's main fountain, most of the street lights are adorned with them, they appear as guardians to every temple and shrine, and a six-storey seven-headed Naga towers over the Sculpture Park as its principal guardian (see photo).

At the end of October every year the Naga Fireballs appear in Phon Phisai and beyond and are mystical pink points of light which arise from the river after sunset on the full moon which is the last day of Buddhist Lent, Okk Paan Saa. These points of light, for which there is no adequate scientific explanation, are said to be the breath of the Naga welcoming the Lord Buddha back to the Earth.

The nearest airport (on the Thai side) is in Udon Thani, 56 km distant. There are minibuses that meet almost every flight landing at Udon. They will take you straight to Nong Khai. On landing at Udon Thani and entering the arrivals hall, there is a counter straight ahead of you where you can buy a minivan ticket. The price is 200 Thai Baht. The journey to Nong Khai takes about 1 hour.

Travel by train to Nong Khai

Nong Khai is the terminus of the northeastern railway line from Bangkok via Khon Kaen and Udon Thani. The trip takes 10-12 hours and a first class sleeper ticket from Bangkok to Nong Khai or vice versa is currently about 1,200 Thai Baht. A second class sleeper ticket (not bad for the price) is 748 Thai Baht. Sleepers often sell out at peak times so you may need to book in advance.

Shuttle services now operate onward from Nong Khai to Tha Nalaeng, Laos (near Vientiane) four times a day, consistent with the arrivals and departures of the Bangkok trains. You can buy tickets only at the Nong Khai station, and you need to pass through immigration as well. (If coming in on Train 69 from Bangkok, there's a 90 minute window to do this.) Once the formalities are done, the trip itself across the Friendship Bridge takes only 15 minutes. Visa on arrival is available on the Lao side.

There are departures to Udon Thani at least once per hour from the BKS station on Prajak Road. The hour-long ride costs 20 Thai Baht in 3rd class (non-air-con). 40 Thai Baht in 2nd class (air-con).

There are several departures daily from Bangkok (~9 hours), Khon Kaen (110 Thai Baht, class 2, with a stop at Udon Thani) and across the border direct from Vientiane (55 Thai Baht, 17,000 kip, two hours) via the Friendship Bridge.

From Udon Thani you can get to Nong Khai via air-conditioned mini-van at 50 Thai Baht per person, stopping first at Friendship Bridge and then in Nong Khai bus station. These mini-vans can be taken in Udon Thani at the plaza separating the Central Plaza mall and bus station 1. Tickets are sold in booth right there.

The only mode of public transport in the city is tuk-tuk. Although the price has gone up recently due to the increased cost of fuel, they remain inexpensive at 20-30 Thai Baht/person to anywhere around the city centre.

Some tuk-tuk drivers will ask for much more than 20-30 Thai Baht/person, but you can generally bargain with them to reach a lower price. When bargaining, smile and be patient and polite (or just walk down the street until you see a roaming tuk-tuk, which will probably be cheaper. This tactic—walking a short distance—is sometimes the only way to get a reasonable price when arriving at the Friendship Bridge from Laos).

A trip to or from the Friendship Bridge can cost over 70 Thai Baht for tourists if only one passenger is on board, although the normal price is 40-50 Thai Baht.

A good way to discover Nong Khai and its surroundings is by motorbike or bicycle. Some guest houses and several rental places around town offer bicycles (50 Thai Baht/day) and motorbikes (200 Thai Baht/day). Lower prices can usually be negotiated for longer rentals. Try the rental stand outside the Mut Mee Guesthouse or at Limmaneemotor on Meechai Road. Go for the one on Meechai Road first. Their motorbikes are a lot better and the people there are very nice. You'll need a copy of your passport to rent one. Very cheap for long-term rental (Honda Dream 125 semi-auto 1,500 Thai Baht per month, Honda Scoopy about 2,000 Thai Baht per month). 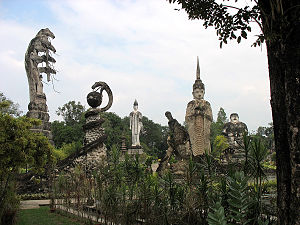 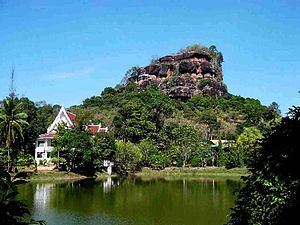 View of Wat Phu Tok from the front

Nong Khai is a charming city to wander around on foot or on a rented bicycle and meet the friendly and helpful locals. It's also a good place from which soak up the Isaan culture of the neighbouring towns, which can easily be reached by bus from the main BKS ("Bor-kor-sor") bus station in the city centre, on Prajak Road.

If you expect the usual tourist traps of Bangkok and Phuket, you will be disappointed. There are no supper clubs, go-go bars, or mega-malls. This is a place to chill by the Mekong River watching passenger and cargo boats scuttle between Thailand and Laos, or to finish that paperback that has been sitting in your luggage for weeks. You may also consider stocking up on travel necessities before trudging on to Laos. Many who have planned only an overnight stay have ended up staying for weeks.

During the months Jan-May when the Mekong River level is at its lowest, the Jomanee ("Joe-mar-nee") 'beach' appears near the Friendship Bridge, 2 km west of town. Food and drink vendors readily provide mats, shade and music for the hundreds of locals and tourists who patronise their stalls. An excellent spot to watch the sunset.

There are a variety of events and festivals that are celebrated and take place in and around Nong Khai throughout the year. They include various Rocket Festivals, Songkran, the Anou Savari Festival, the Candle Festival, the Rowing Festival, the mysterious Maekong Fireballs, the Chinese Festival, and Loi Krathong. In chronological order: 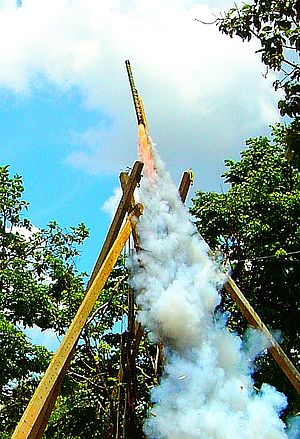 Getting a Thai Visa in nearby Vientiane

South of town on the Udon Thani Road is a Tesco-Lotus, a full-fledged Western-style supermarket with satellite shopping arcade and a cinema (nearly always Thai or Western movies dubbed into Thai). Nearby on Sunday afternoons/evenings is the Sunday Market, which sells all kinds of things.

There are plenty of banks with ATMs, in particular along Prajak Road, and on Meechai Road which runs parallel and to the north of Prajak Road. Some ATMs limit withdrawals to 3,000 Thai Baht/day, although the ones inside Tesco-Lotus near the cashiers allow withdrawals up to 25,000 Thai Baht. The only bank branch open on Saturdays is at the Tesco-Lotus. If you stand in front of the main entrance pass the building on the right side and enter near the bookshop.

Unfortunately no accommodations were found.

Unfortunately no tours were found.

Unfortunately no car rentals were found.