Nan (น่าน) is a town in the remote valley of the Nan River in the Northern River Valleys region of Northern Thailand, bordering Laos. The area is heavily forested with arable land used mainly for agriculture. It is an ancient city steeped in history with its long association with the Lanna Thai culture and the Sukhothai kingdom. 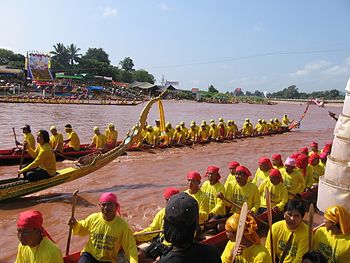 Little-known Nan goes back to the depths of the history of Thailand. For centuries it was an separate, autonomous kingdom with few relationships with the outside world. The name Nan is also used in Thailand as a name given to annoying, buck-toothed, moon-faced children.

There are many evidence of prehistoric habitation, but it wasn't until several small meuang united to form Nanthaburi on the Nan river in the mid-14th century - contemporary with the creation of Luang Prabang and the Lan Xang (Million Elephants) kingdom in Laos - that the city became a power to be taken into account. Associated with the mighty Sukhothai kingdom, the meuang took the title Wara Nakhon and played a significant part in the development of early Thai nationalism.

By the end of the 14th century Nan was one of the nine northern Thai-Lao principalities that comprised Lan Na Thai (now Lanna) and the city state flourished throughout the 15th century under the name Chiang Klang (Middle City), a reference to its position roughly midway between Chiang Mai (New City) and Chiang Thong (Golden City, which is today's Luang Prabang.

The Burmese took control of the kingdom in 1558 and deported many of the inhabitants to Myanmar as slaves; the city was completely deserted until western Thailand was retaken from the Burmese in 1786. The local dynasty then regained local sovereignty and it remained semi-autonomous until 1931 when Nan finally accepted the full dominion of Bangkok.

Parts of the old city wall and several early wat dating from the Lanna period can be seen in contemporary Nan. The city of Nan's wats are distinctive: some temple structures show Lanna influence, while others belong to the Tai Lü language, a legacy brought from Xishuangbanna in China, where the Tai Lüs came from.

The city spreads out along around 4 km, between the airport at the north end of town and the bus station at the south end, but its historical and commercial centre is more compact. Its area follows roughly a north-south orientation, along the right bank of the River Nan. The two main axes of the town, more or less parallel, are Sumonthewarat Road (the easternmost and the closest to the river) and the Mahayot Road. The city's main monuments are located at the junction of the three parallel axes: Pha Kong Road (west), Mahayot Road (middle), and Sumonthewarat Road (east) and Suriyapong Road which is perpendicular to them. As for the main shops, they can be found along the Sumonthewarat Road and its perpendicular, Anantaworattidet Road.

In the town, three bridges connect the right bank to the left bank of the River Nan: the southernmost, the Sriboonruang Bridge, the middle one, the Pattana Paknue Bridge, under which are held the boat races, and the northernmost, the Nakorn Nan Pattana Bridge.

Nan is connected by plane and by bus to the rest of the country.

Nan Airport (NNT) is at the north end of town, on the road to Pua-Thung Chang-Thai-Laos border (Rte 1080), about 1.5 km from downtown.

The train station serving Nan is Den Chai in Phrae Province. From the train station, take a songthaew parked in front of the station to Phrae bus station, about 30 min. Then catch a bus to Nan. There is also bus service directly to Nan from Den Chai. But you need to go to Den Chai bus station to take the bus.

The main bus station (Baw Kaw Saw) is at the south edge of town, at the end of a road perpendicular (turn left when arriving from Bangkok) to Wiangsa/Phrae/Bangkok Road.

The mountains of Doi Phu Kha National Park, approximately 80 km by road northeast of the city

Transportation in Nan is terrible. A traveller reported arriving at the bus station at 20:30 and finding no songthaews, tuk-tuks or taxis available (Mar 2015). That resulted in a 3-km hike to the guesthouse.

According to the Bangkok Post, the top two attractions are Doi Samer Dao and Wat Phumin, a temple with many local art masterpieces. 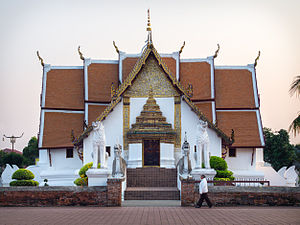 Banks with ATMs can be found all over town, notably at Sumonthewarat Road, Anantaworrattidet Road and Sumon Thevarat Road.

Nan is noted for making musical instruments which include the saloh (สะล้อ), a violin-like instrument, and the sung (ซึง), similar to a guitar. They are used in bands which can still be heard in certain restaurants.

The leading agricultural produce is the Som Si Thong (golden orange) (ส้มสีทอง) which are of the same species as oranges of the central region. Because of climatic differences, the local version is golden-skinned and more aromatic. They are in season in December.

Unfortunately no accommodations were found.

Unfortunately no tours were found.